It's been over a year since I last updated this journal. It's funny. I remember how important it used to be... to tell the internet world what I was up to. And to keep in touch with my friends.

I still keep in touch with my friends. I've reverted back to email and phone calls. A more direct approach I guess. Maybe more honest as well. I don't know.

I still keep a journal though. A private journal just for me. I bought a leather bound journal and I make an entry 4 or 5 times a month at least.

Maybe I don't do the online blogging thing anymore because I feel like I'm not interesting enough for people to want to read it? But I'm not so sure. I don't think that's it either. I think maybe I've just grown to be a more private person. I don't boast, brag, whine, or air my dirty laundry via public forum. I save that for late night phone calls to my best friends and daily talk with my husband. Haha.

It's just strange. I remember high school and the early college years... online was the way to go for me. Not so much anymore. I barely log into facebook anymore either.

I should probably reconnect with some old friends though. I miss some of them very much.

So I guess my 10 year high school reunion is coming up... Ugh... that just sounds horrible. (insert giant fart noise here) No thank you.

I dunno. Maybe I'm apathetic to this entire idea because about half the kids I hung out with were a year or two ahead of me... so I dunno. I mean there were some legit cool people in my class and I hope those people are doing well, but I don't care to see any of my high school class mates again. I mean I still talk to all the people I care about from high school. So why the fuck would I care to see any of those other douche bags again?

All I know is my email is being spammed to death with high school reunion stuff right now. And to be honest I don't care for it.

Maybe I should care about stuff like this? I dunno... well... I don't.

I care that I don't care though. Like maybe there is something wrong with me for not being all excited to go to something like this... I just find myself sighing and rolling my eyes about it though... HAHA! Like some sort of teenager who doesn't want to go to class. Whatever.

Now if we have a 60 or 70 year high school reunion... then I'd show up to see that giant crap fest. That would be awesome.

I'm off tomorrow... and tonight I am getting toasty! My job is retail... and it makes it hard to have a life outside of work. Through the holiday season I've been living my schedule. It's all been work. I'm half way to buzzed. ALMOST THERE! Wish me luck in my drunken adventures tonight!

Hope everyone had a merry Christmas!

Btw here's our cover of our xmas card this year!

Things are good. Busy. I have another wedding to shoot in July. Wish me luck.

Matt's doing very well in school. He will graduate this December. He's already trying to line up a couple of job prospects. Wish us luck in that department! Though I know we won't need it. Matt is a gifted student and a very huge catch for anyone looking to hire him. I'm very proud of the great grades and huge amounts of work he as done over the last two years.

I'm thinking about going back to school when he's done to finish up my psych. degree. Time to better my job prospects as well.

Other than that... work work work. And that's it. A few old friends have contacted me via facebook recently to see what I was up to and I always feel lame. I have nothing really to tell other then I work and that's it... With the exception of a couple who I haven't talked to in YEARS and they didn't know I was married and all that sort.

Anyway. Gotta go get ready for the grind. Hope all is well with everyone in my LJ world.

I know most of us have said this, but wow...not that many people postin' on LJ anymore.

I have to find a way to not let work stress me out so much. Lately I feel like all my venting and moodyness has to do with work and honestly I'm tired of it.

I am now 27-years-old. That's crazy. Is it sad that I still get excited like a little kid when it's my birthday?

2010 has been a good year for me, but it has been peppered with bad moments. Overall economically it's been okay for me as an individual, but nationwide finances have been trying.

Disasters were plentiful for 2010. The Haiti earthquake happened on January, 12th, 2010. It's hard to believe in 10 days it will have been one year since the destruction and the people of Haiti are still in a horrible state.

The BP oil spill happened in April of 2010 and we are still trying to recover....and will be for many years to come.

On a more personal note: Cabbott died on September 7th, 2010. I have my moments where I've made peace with this fact and then I have some pretty rough times. It's the little things and memories that keep popping up that make it hard.

Matt and I celebrated our one year anniversary on September 22nd, 2010.

And December 31st, 2010 is the first year I have sat at the house for New Years and watched the ball drop on television. Usually I'd be on River Street in Savannah, GA or at some sort of celebration with friends... watching fireworks and drinking some form of alcoholic beverage.

And as for my overall growth experience this year:

Well I guess this is the first year I can end and truly say that I feel like I've learned a lot more and grown a great deal more. I'm truly learning what it means to be married. I've started my "working for the bills" portion of my life and it could be better could be worse.

One thing I've thought about a lot is the fact that I now understand a few more key instances where my parents said, "You’ll understand one day Laura."

Whenever my parents were too tired to go and do something or hesitated to spend money on something frivolous I would often get frustrated. I mean I wouldn't throw temper tantrums. I was never that kind of child/teenager, but I truly and simply just "didn't understand."

Now I do. And I'm not sure how eloquently I can put this: It's a different world: the world of work. I don't have the privilege of working the preverbal nine to five yet. But it's hard to go and spend 8 to 10 hours working on your feet all day... and then come home, do dishes, clean house, feed the animals, balance the check book, pay bills, keep a tidy car, cook dinner, and in general keep your home life organized. I wouldn't say that it's all hard work and no play... certainly not. If that were the case then what would all the hard work be for? It can be very rewarding too. To look around you at the productive things you have done that day.

We all have challenges in one way or another. And I always try to keep that in mind. I wouldn't call my schedule harder or easier than any other person's schedule. It's just different. And the fact remains: you don't know what the other person has on their plate until you've stepped in their shoes. The fact is, no matter how much I hated hearing this in college/school, (and believe me I did hate hearing it), this "real world" is vastly different. And I just have to keep in mind that some friends and family members won't understand why I bail out on certain events, but they'll get over it.

College is work, but this is a different kind of work. In college I got weekends off. This is not the case now. I hope I can gain that back one day. In school people expected that my house/room should be a bit messy. After all... isn't that the stereotype of all college students? But now it's time to grow up. And part of that is just doing the simple things mom used to tell me to do, "Put things back where you found them. Clean up after yourself."

Growing up isn't easy, but it's not all hard work either. There are plenty of freedoms I enjoy... and some simple privileges I miss.

2010 has been a good year overall. It's been a year of loss. But I hope that from some of those losses I can just grow stronger and maybe develop a little thicker skin.

For 2011, I hope to get healthier, save more money, and start getting interested in a career.

Good luck to all and I wish you nothing but the best for the upcoming year. 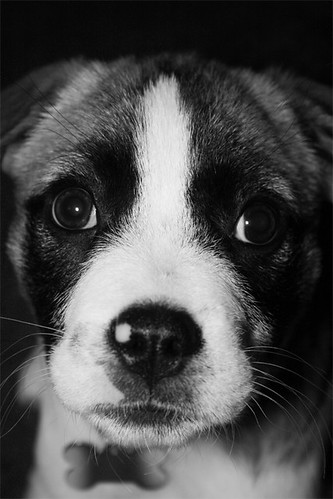 We got her in early October. I have little puppy pictures as well. I'll post them later. She's an American bulldog mix. Very exhausting, but fun. And if she weren't so damn cute she'd totally be a pound puppy. She's a mess.
Collapse